Mouth From The South
Home Chicken Crisp Roasted Chicken with Chickpeas, Lemons, and Carrots – Or How Clove... 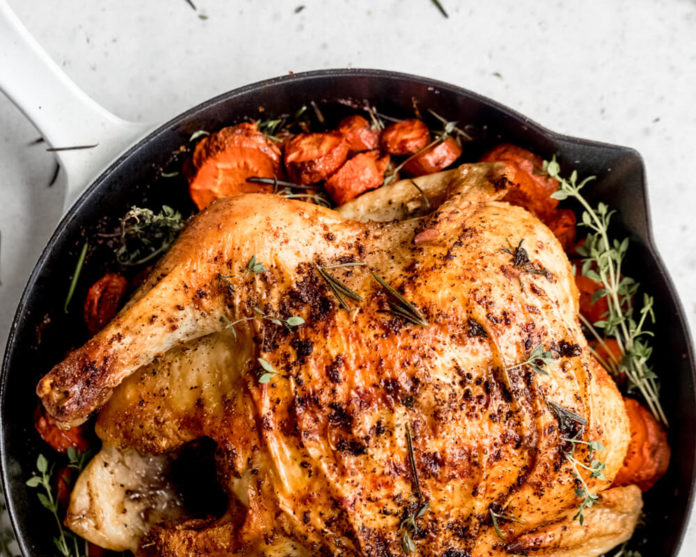 I hate cloves. I mean I really, really, really hate cloves.  And it’s all my fault.  You see when I was 17, I was an idiot.  That statement stands for about 75% of the stuff I decided to do at that age but in this case, I’m thinking about one specific incident. 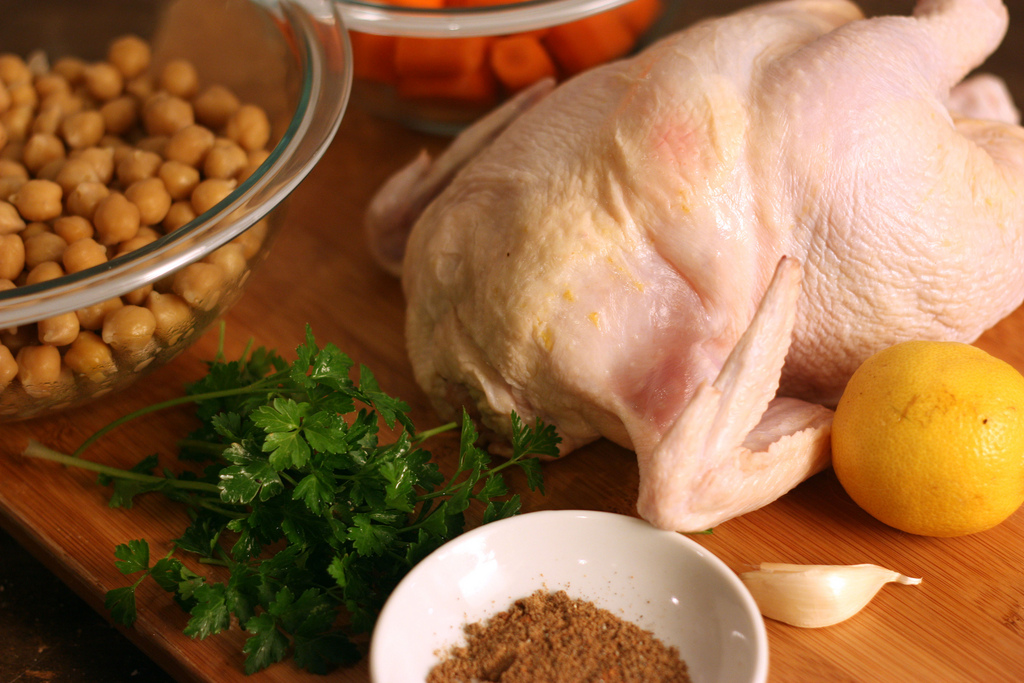 At some point, I managed to procure a pack of illicit clove cigarettes.  Which in the idiotic way that 17-year-olds think was WAY COOL.  You know what was even cooler? For me and my friend, Amy, to drive to a monastery near us and smoke the whole pack on the grounds outside.  Nothing says you’re hardcore like going to a nearby religious institution, sneaking around outside, smoking a whole pack of clove cigarettes and feeling like death warmed over.  I spent the next week feeling like my lungs had melted & like my stomach was going to revolt at any moment.  Clearly, not one of my brightest ideas and I swore never to repeat it. I think this was the only time I have uttered “I will never do this again” and I didn’t do it again.  Such are the evil power of clove cigarettes. 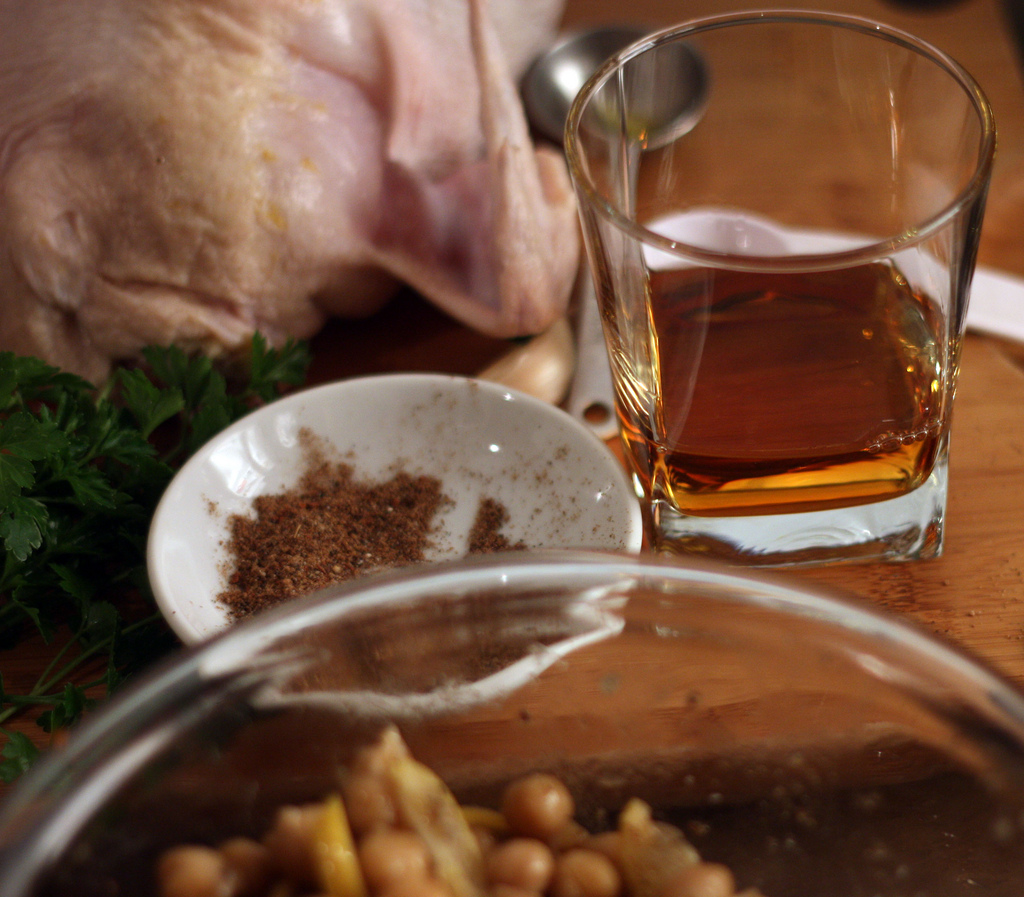 I’ve occasionally uttered “I will never drink bourbon again”.Clearly, you can see from the picture above that that utterance has never come true.

My clover aversion has caused problems for the rest of my life.  For example, I was a counselor at my college for high school debate camps.  The first thing these 16 & 17 year-old kids would do was head down to Georgetown and buy fake IDs and clove cigarettes, because they were as stupid as I was.  (Note – I never had a fake ID.  Not because I didn’t want one but because the idea of my baby face being able to use a fake ID successfully was laughable.)

Since I was their counselor, I had to make sure they were in by curfew and try to ignore the fact that they all reeked of clove cigarettes.  I tried to explain that by smoking clove cigarettes, they were melting their lungs but they tended to ignore anything that we counselors had to say.  It’s also difficult to assert your authority when you’re gagging at the smell of your campers.  I always thought that would be a good life lesson for them – see what happens when you smoke clove cigarettes?  Your counselor throws up on you.  That would teach them. 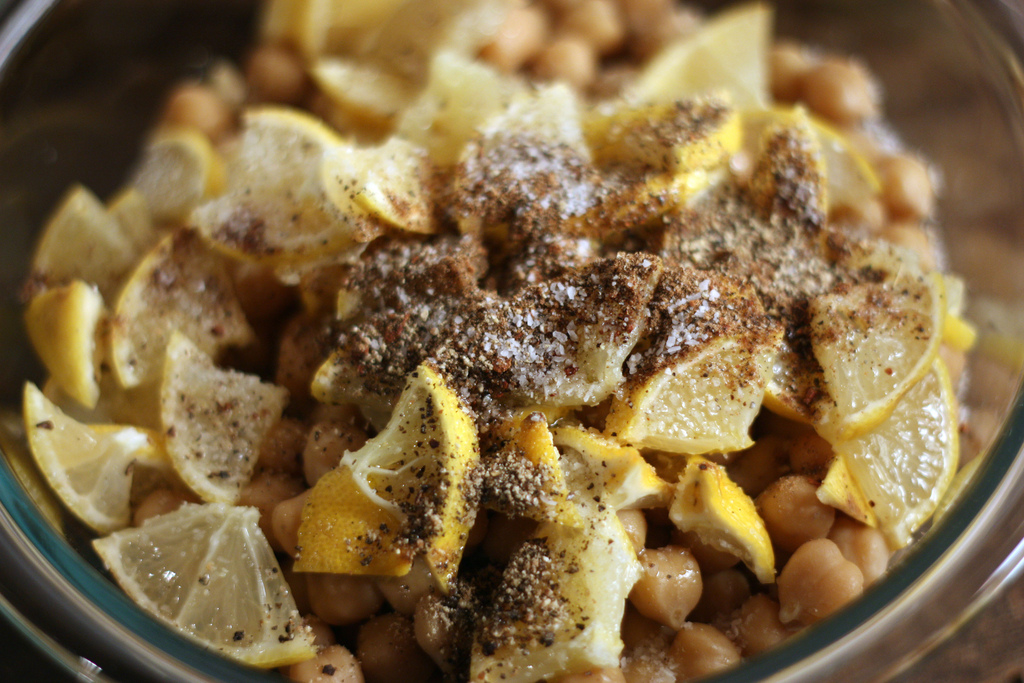 When I tell people about my clove aversion and why I have it, I usually get two responses. Most people snicker at how stupid I was.  And then there are those who shudder because they too were idiots.  This aversion to cloves has often gotten in the way of my love for good food.  I have a low clove threshold and if a recipe goes over that line, I find it difficult to enjoy it.  Cloves are my tequila of the spice world.

Melissa Clark’s roast chicken recipe from Cook This Now: 120 Easy and Delectable Dishes You Can’t Wait to Make has cured me of my clove distaste.  I love this recipe.  I want to marry this recipe.  The first time my husband and I made it, we ate it straight off the roasting platter without bothering to transfer it to plates. It is easy to make, so comforting while still tasting new & exciting, and it’s wowed everyone I’ve served it to.  The carrots caramelize in the chicken fat and the chickpeas get deliciously crispy while the garam masala gives it a little taste of exotic.  And the crispy pieces of roasted lemon? So good. 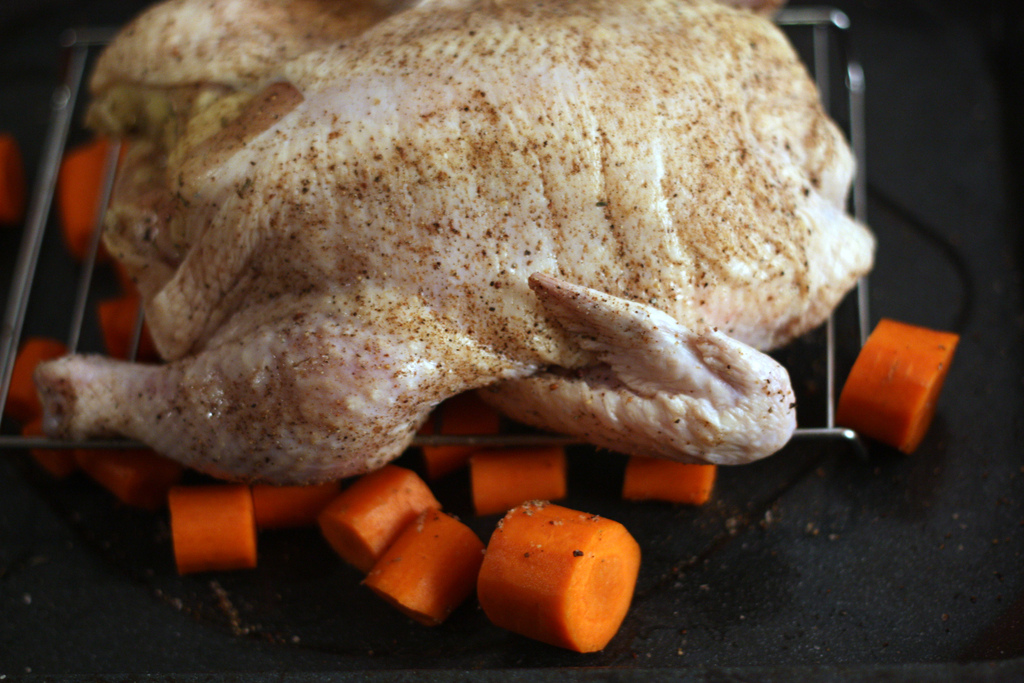 I’ve taken to making the chickpeas and lemon mixture by themselves and I plan on adapting it this week by making it with chicken leg quarters rather than a whole chicken. I also made a very small change to the recipe.  I added onion pieces in with the chickpea mixture.  There’s something about chicken schmaltz and onions together that I can’t resist.  I also have no roasting rack so I used a sturdy baking rack.  I strongly urge grinding your own garam masala.  We own a cheap coffee grinder and it couldn’t be easier to use.  When you buy packaged garam masala, it oftentimes can taste stale and the flavors are muted.  Take five minutes and grind your own. 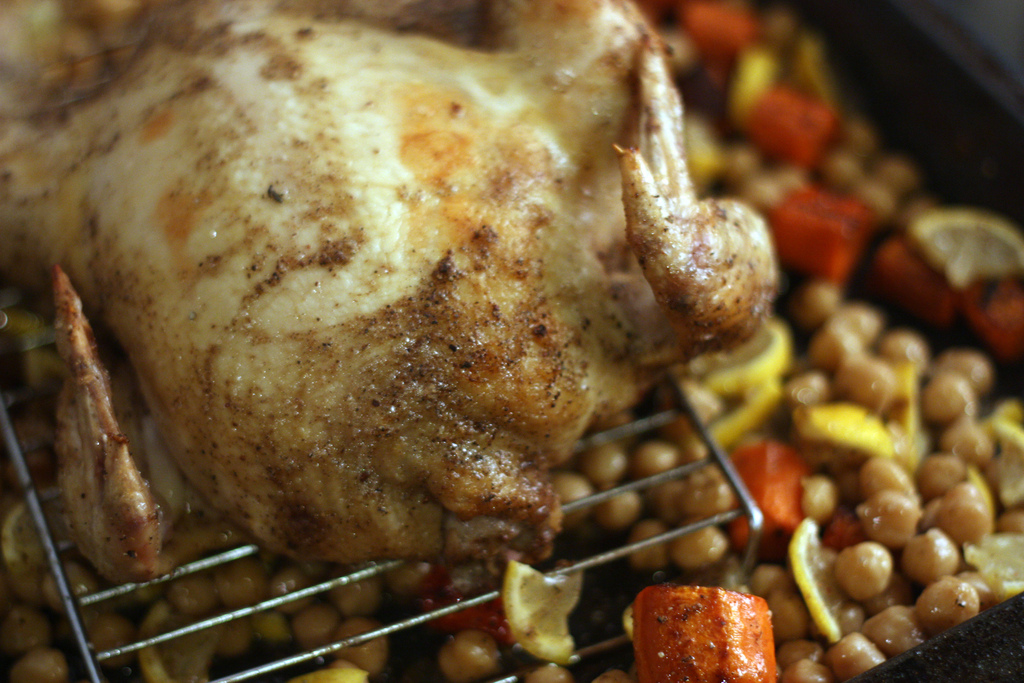 1. Preheat oven to 400 degrees.  Quarter the lemons lengthwise and remove any seeds.  Thinly slice 6 of the lemon quarters crosswise.  In a bowl, toss them with the chickpeas, onions, olive oil, 1/2 tablespoon garam masala, 1 teaspoon salt and 1/2 teaspoon pepper.

3. Scatter the carrots in the bottom of a large roasting pan.  Place a wire roasting rack over the carrots and arrange the chicken, breast-side up, on a rack.  Transfer pan to the oven, stirring the carrots once or twice, for 30 minutes. Remove from oven.

4. Scatter the chickpea and lemon mixture into the bottom of the roasting pan.  Continue to roast chicken until chicken comes to 165 degrees or thighs juices run clear when pierced with a fork, 45 to 60 minutes longer.  Let chicken rest for 5 to 10 minutes before carving.

5. Meanwhile, combine the parsley, lemon zest and garlic in a bowl.  Spoon the carrot-chickpea mixture onto a platter.  Arrange the chicken on top and sprinkle the gremolata over the entire dish and serve.

Place in a clean coffee or spice grinder and grind as finely as possible. 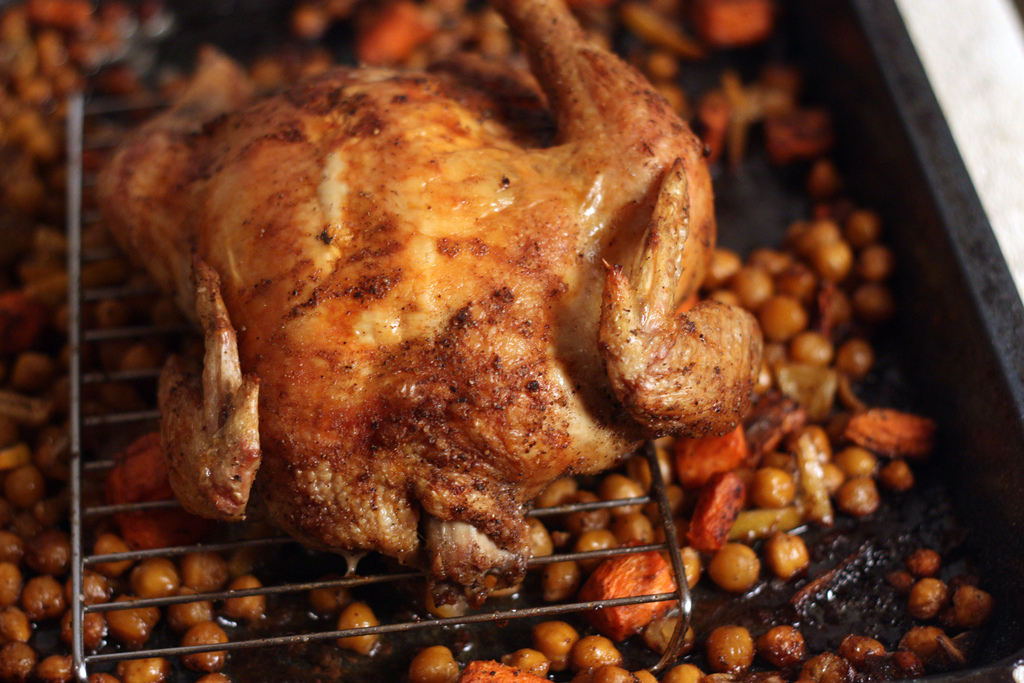 The History Of Fried Chicken

Damp Specialist Benefit To Your Diet

How to Start a Food Blog And Use Instagram Bots

Getting Into The Food Business

The Key Hallmarks Of A Glasgow Indian Restaurant